Hi all.  I have a really great idea for a blog post that has been on my mind for a few months but I lacked time.  Recently I have found that I may have a little time to blog so let me catch you up on my roller coaster.   So remember how I changed jobs in March because my employer for 15 years went bankrupt?   Yeah, well I went to work for a nice little start up carrier but about 6 months in I was contacted by a friend who knew of a job opening at a commercial carrier, which was something I always wanted to do and so I made the jump.   I made the switch because this company is stable and not going anywhere.   I knew I had a good chance of ending my carrier here and I was finally having fun.  But as sometimes happens, companies make decisions that are unexpected and mine decided to move the entire office, sans employees, to another state and combine offices.  So that leaves me here, at home, working on a blog for the first time in months.

Now to be honest, I have been keeping very busy and I want to say to all the stay at home wives out there, you have my utmost respect.  I can honestly say in the last few weeks I have been 'Unemployed' I have worked harder than I ever did working.   I have painted rooms and trim and run to the super center more times than I want to count.  I have cleaned carpets twice and spent a good 3 days decorating not only my inside of my house but my outside.   Yes, it took 3 days.  I climbed more ladders last week than I thought humanly possible.

So here are some of the Christmas décor photos.  Time for me to do some job searches but I will get right on that new blog after.

Happy Anniversary to the man:

Who makes me laugh even when I don't want to.

Who supports me when things go wrong and that has happened too often in 2016.

Who likes to argue with me about NFL being better than MLB, he's cray!

Who taught me how to be an awesome chicken chick and duck diva.

Who opened a whole new world of hunting, fishing, and NASCAR to me.

Who supports me even when I tell him I want to change jobs for the second time this year.

Who loves me even when I am crazy, bitchy, or annoying.

Being a FAN: Texas Rangers and beyond for the love of a team

It is no secret that I love baseball and more specifically the Texas Rangers.  In years past I have spent up to 35 games a regular season at the ballpark.  I was single and it was my entire social scene for a long time.   While I don't have the time or money to make that commitment at this time in my life,  I plan to be at the ballpark at least 10 times this season.   When you consider the investment, 2-3 tickets averaging $35 each (sometimes more, sometimes less depending on my mood and bank account) plus parking at $15-$20 per game, the money invested is substantial and that doesn't even include beer, soda, and nachos or whatever else you choose to consume or not consume at the ballpark, none of it cheap.  A night at the game for a family of 3 can easily exceed $200 and that is before you figure the cost of the shirts you purchased to attend and the refreshments you brought to tailgate.

But more than that there is time invested. even if you don't go to the games as much as I do, which is nothing compared to some people (who would probably not consider me a good fan, because I am not there enough) there are games on TV.  At minimum, 162 games a season which I devote my viewing life to from the end of March until whenever the season ends, sometime in late October if I am really lucky.   Do I miss a game?  Sometimes it happens.  I mean, life happens for all of us.  Usually, I miss part of a game at most.

So when you are a fan, you get to know your team, the players and if you are on Twitter, other fans.  There are no rules to being a fan except that you love the team.  For me, I have a personal rule never to boo my team when I am at the ballpark.  That does not mean however, that I can't be critical of a player or players who are hurting the team.  When you watch a player struggle, usually you begin by feeling bad for that player and hoping they snap out of it.   After a while however, they just become a burden to the team and as such, the fans.   When a pitcher just can't find the strike zone he is frustrating to watch.  When a hitter can't hit the ball and kills an offensive drive, he makes fans crazy.

There is an emotional investment in the team and fans are critical, even of their own players and you know what?  We have that right.  We can get mad when a player is hurting the team.  We get to be upset when a player isn't performing up to his billing or contract.  We spend our hard earned money and our precious time so we have a right to voice our displeasure.  It doesn't mean we are bad fans.  It is actually the opposite, we love the team so much that we are miserable watching a player who continually under performs and we don't follow the player blindly at the expense of the team.  That doesn't mean we won't be thrilled if/when the player snaps out of it.  That doesn't mean if, for example the Texas Rangers Shawn Tolleson finds the strike zone and becomes a machine, we won't all be cheering or if Prince Fielder suddenly manages to connect with the baseball and break out of his season long miserable slump, we won't all be calling him a beast again.  It simply means we want the best players on the field every day and maybe that player is Sam Dyson or Jurickson Profar.

Some fans have silly rules, nobody over a certain age should wear a jersey.  Nobody should leave the sticker on their cap.  Caps must have the brims bent.  Yada, Yada, Yada.  There is one rule for baseball games: No WAVE!   Okay, so that is my rule and believe me, my husband breaks it just to annoy me.  The wave belongs at football games, end of story.  Wear what you want.  Wear it any way you want.  Although know this, if you wear high heels to a baseball game, I am going to laugh at you.

Being a fan simply means living and dying with your team.  You don't have to be mean to other fans, although some of us are.  You don't have to be critical of players, although you have that right.  You don't have to spend  10, 40, or 81 games a season at the ballpark, although some of us do.   You don't need a large Twitter following to be a good fan, although some of us have them, it isn't a popularity contest.  You don't need 3 pair of shoes, 35 shirts, 8 pair of earrings, necklaces, handbags, bracelets, and team rings, although I have them.  (Seriously, I am like a walking billboard when I go to a game).
Some of the best Texas Rangers fans that I know live in other states Iowa, California, North Carolina and Canada.  They love the team just as much as I do, maybe more.  They are fans.  They may not be the most vocal fans.  They may not be the most critical fans.  They may not be in attendance at every game or any game, but they are amazing fans.

So even if you are a fan of the Astros, Yankees, or the hated Toronto Blue Jays, it is your team. Own it. Shoot, you may not be a baseball fan at all, that's okay.  Some people like football.  Believe it or not, there are some Cowboys fans in Dallas-Ft Worth.  I know. I know. Crazy, right.   We even have a hockey team called the Dallas Stars and a basketball team, the Dallas Mavericks, those teams have fans too.  It's okay to be a fan of those teams too, I am. (Not the way I am the Rangers but I am to a way lesser extent, especially on the Cowboys who I just find frustrating.) 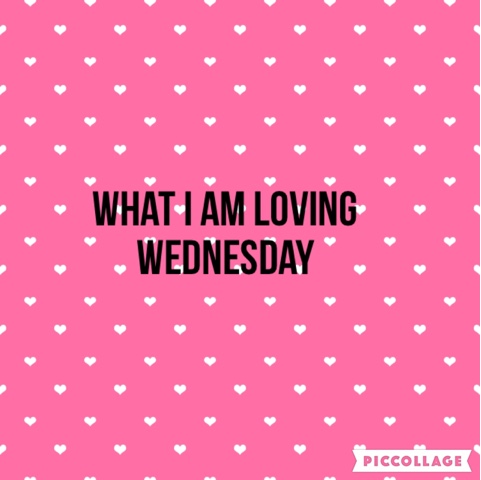 Hey there party people.  Happy hump day! Is this really the first actual "What I'm Loving" post I have done this year?  I can't believe it!  I should be on my way to work by now but I thought I wold stop in to my blog and say hello and share a few things I am loving this week.  Ready?
*I am going to start writing for our local backyard chicken coop tour blog.  Yep, me.  I'm super excited.  I get to interview awesome coop owners and find out all about them and their chickens!  Now for those who don't know, I always intended to be a journalist when I graduated high school and went to college but that plan went somewhere out in way left field.
* 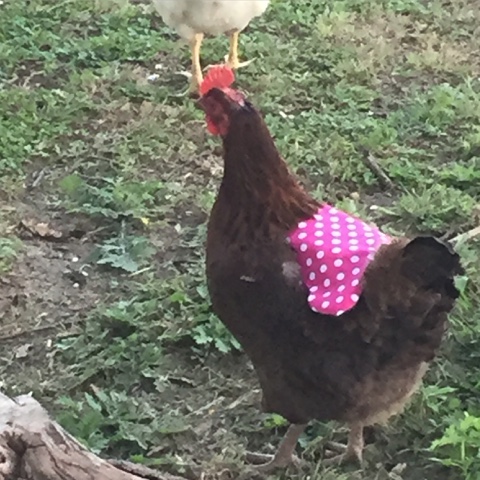 Speaking of chickens how cute does Patches look in her saddle?  Now aside from being a totally fashion forward hen, this saddle is protecting her back feathers from my frisky Roosters.  Patches and her hen friend Ruby are the favorites and they pay with missing feathers.
* 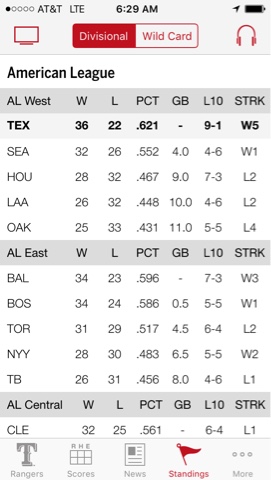 Baseball is making me very happy right now!  The Rangers above and the Cubs below, are trying to make my dream World Series happen! 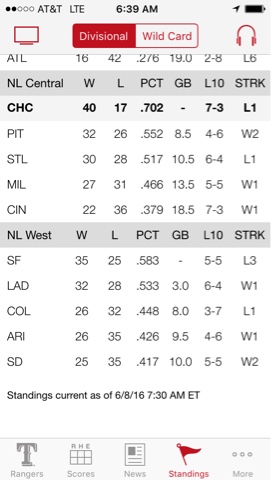 *Yu Darvish the Rangers pitcher who returned from surgery and Juricksen Profar who is a shortstop but has also played second and now first is also returning from surgery and both have been very good.  Yu Darvish is probably my favorite current player and I am so happy with the idea of Profar moving to first that I tweeted this last night: 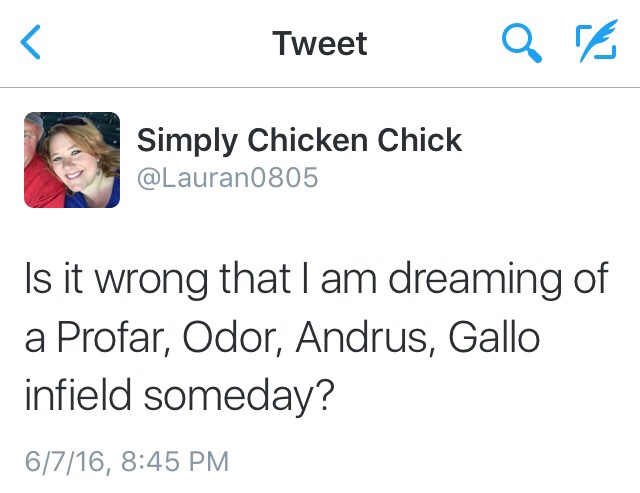 *I am loving that the dogs got a bath last night.  They needed it! 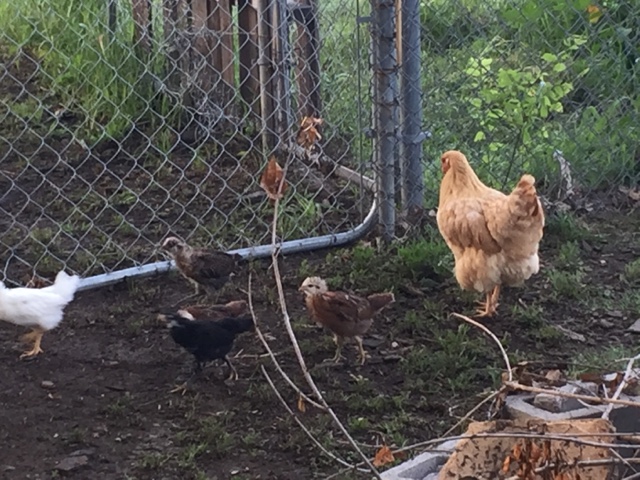 And I am loving that mama hen Lemon takes her babies out and shows them the lay of the land and important stuff like the garden.  Of course being kids, they don't listen!
So what are you loving?
Posted by Laura @Simply Me, The way I see it No comments:

Welcome to my crazy life! 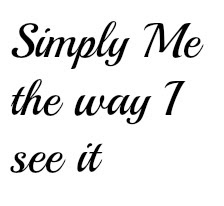 I hope you enjoy the Ride! 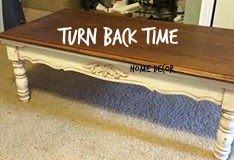 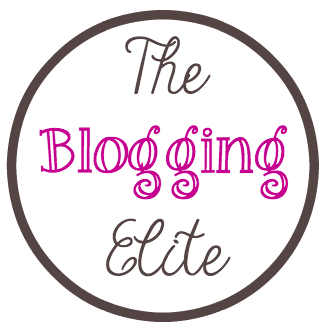